Have a topic in mind? Send suggestions to Laura Trutoiu, ACD Director of Research auract@creatineinfo.org. END_OF_DOCUMENT_TOKEN_TO_BE_REPLACED

Being a parent of a child with a rare disease has its unique challenges. There are so many questions that you ask yourself on a daily basis.

Why does my child have this condition?
Why is he not developing like other kids?
Why are there no treatments available?
Why can’t I do more to help him?

These questions change all the time, but the really frustrating part is that the answers do as well. END_OF_DOCUMENT_TOKEN_TO_BE_REPLACED 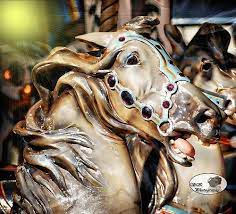 The bell rang, the music started, and we began moving slowly. The expression on his face changed almost immediately, and in that moment, I knew I had made a huge mistake. His horse’s face was frozen in a contorted expression of distress that matched the rider. I hopped off my horse and attempted to calm him, but as he went up and down and round and round faster, his fear only grew. He clung to me with a death grip. I managed to peel the man-child off his horse when at its lowest and sit him in the seat behind him. By then, the operator, realizing there was a problem, had brought the ride to a stop and was standing at the top of the stairs. When he saw that Sam was safely planted on the bench, he gave me a thumbs-up and started the ride again. I climbed on the nearest horse and continued to reassure him from a distance. END_OF_DOCUMENT_TOKEN_TO_BE_REPLACED

#CreatineDecoded is a quarterly educational essay series that sheds light on research relevant for Cerebral Creatine Deficiency Syndromes (CCDS). The essays feature community contributors, often parents, who with the help of the ACD, explore in their own words the CCDS science you want to know more about. Have a topic in mind? Send suggestions to Laura Trutoiu, ACD Director of Research auract@creatineinfo.org.  END_OF_DOCUMENT_TOKEN_TO_BE_REPLACED

Do you ever feel like all the work we do for our kiddos is not enough? How about feeling lost and deep deep pain when you see your child struggle every day? Lately, this is what has been running through my head. My family and I work so hard to help Caiden be successful with everyday life. Sometimes I feel deep down that it is still not enough. From the time we wake up to the time we go to bed I wonder if he will be okay without me by his side all the time. I feel so much pain for him when he has behavior after behavior after behavior on a daily basis. Recently, he decided that he no longer wants to go to school. I now need help just to get him loaded into the car. To top it all off, every day, like clockwork, we receive texts, phone calls, and emails from his teacher and principal with behavior reports. Getting these is the worst feeling in the world. How do we know if what we are doing is hurting our children or helping them? END_OF_DOCUMENT_TOKEN_TO_BE_REPLACED

The National Organization for Rare Disorders (NORD) recently hosted a webinar on the “Rare Sibling Experience.” As the mother of two children, one who is diagnosed with Creatine Transporter Deficiency (CTD) and one who is not, this resonated with me and I was very curious to hear from experts on the topic. Questions about how to handle the experience of my daughter as the sibling of a child with a rare disease often swirl around in my head. My son Cadman is 6-years-old and has CTD. My daughter Emma is 3. Because of their young ages, most of my concerns are about the future, how this will affect Emma as she grows up, and wanting to make sure that as their parents, we are communicating in a healthy, constructive way. The webinar covers communication tips for siblings of various ages (very different for a preschooler vs. a teenager!). END_OF_DOCUMENT_TOKEN_TO_BE_REPLACED

“Coping With the Fear” – Nancy

“Coping With the Fear” – Nancy

I had just poured myself a cup of coffee and settled in for the 2-hour Ultragenyx Study, feeling I might have something to offer having been in the CTD world for 20 years, when the second question knocked the wind out of me: What is your greatest fear for the future? It happens every time that question is asked of me. It seems that the fear for the future is always lying just beneath the surface like an alligator waiting to strike. I immediately lost my ability to speak and raised my index finger, asking for a moment to gather myself. I’m surprised by my sudden and intense emotional response to that question, and I’m embarrassed. The ladies interviewing me are gracious and give me the time I need. I just met them, but I feel that maybe they have kids, too. Maybe they understand. I take a deep breath and attempt to convey how I feel, how I worry that my son will be mistreated, neglected, or abused without my vigilance.  I worry who is going to wipe his butt when he, a grown man, uses the bathroom. Or who is going to cut his food small enough so he doesn’t choke. Who is going to draw him away from his puzzles or iPad long enough to interact with real people from time to time? I worry he won’t understand where I went when I’m gone and that he’ll think I left him on purpose. I worry he won’t feel loved. END_OF_DOCUMENT_TOKEN_TO_BE_REPLACED

“New Rules for our School” – Randi

“New Rules for our School” – Randi

We are very fortunate in our state to have scholarships for children who qualify for an IEP but don’t attend public schools. This helps with funds for a visiting Intervention Specialist (special ed teacher) as well as home-based therapies. Sonnet’s health crisis has resolved greatly since she was diagnosed and began treatment for GAMT. However, her neurologist and I vividly remember when she was dealing with fifty-plus seizures a day. It isn’t certain if a serious illness could cause another downward spiral, so our family has chosen to largely quarantine during flu season. This was extended and amplified during the pandemic. END_OF_DOCUMENT_TOKEN_TO_BE_REPLACED

#CreatineDecoded is a quarterly educational essay series that sheds light on research relevant for Cerebral Creatine Deficiency Syndromes (CCDS). The essays feature community contributors, often parents, who, with the help of the ACD, explore in their own words the CCDS science you want to know more about. Have a topic in mind? Send suggestions to Laura Trutoiu, ACD Director of Research auract@creatineinfo.org.

When we got Rohan’s Creatine Transporter Deficiency (CTD) genetic diagnosis mid-2017 he was two and a half and had barely started to walk. Though sweet and loving, Rohan wasn’t using words and wasn’t quite doing what other two year olds do. It was a long road to a diagnosis and finding the genetic cause was a blow and a sigh of relief. I got the call at work and jumped out of an ordinary meeting into a brave new world full of genes and mutations.
END_OF_DOCUMENT_TOKEN_TO_BE_REPLACED

Disclaimer: All thoughts and ideas expressed in the Creatine Community Blog represent the individual blog contributor's opinions and not those of the Association for Creatine Deficiencies. The ideas expressed in the Creatine Community Blog, and any other locations on the creatineinfo.org website, should never be construed as medical advice, even if the information relates to actual health care experiences of the contributor. Individuals should always follow the instructions of their physician and make no changes to their care unless instructed to do so by their physician.